Our family hasn’t participated in Halloween for over 20 years. However, knowing that I couldn’t deter costumed kids from coming up to our house and ringing our doorbell AND knowing that our little Theo is highly social, we decided to embrace the evening instead of ignoring it.

I dressed Theo up in his Batman costume and told him that we were going to get some visitors tonight. Although he couldn’t have completely understood, he seemed eager to wait at our door to see what might happen. 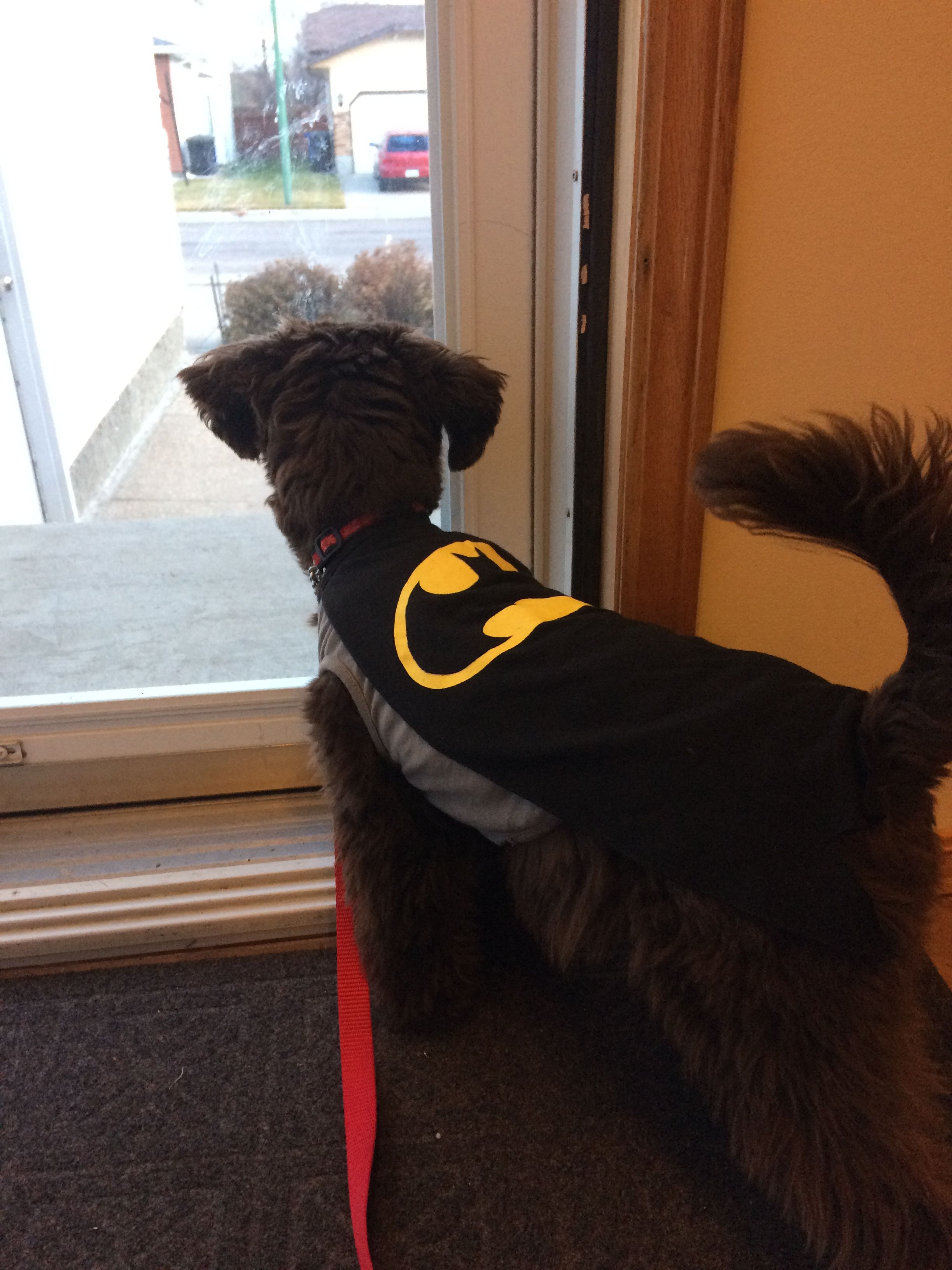 When the first child arrived for treats, I had to pick Theo up and hold him because he was so excited. He was literally shaking, and kept trying to wriggle out of my arms so he could greet the kids up close and personal. This particular child was quite small and probably was overwhelmed with the whole Halloween thing anyway, so it was best I restrained Theo.

This scenario repeated itself a few times with other kids until I realized that the best way to handle the evening was to let Theo go out and walk around the neighbourhood. So despite an injured ankle (I had sprained it badly a few days prior) and still in the midst of a bad cough/cold, I headed outdoors with Theo so he could more easily engage with the kids and parents.

It was interesting that Theo wasn’t frightened by the costumes, as weird as some of them were.  In fact, he was in his element, and greeted the trick-or-treaters everywhere we went; in turn, he was openly welcomed. So he could experience the whole Halloween night thing, I walked him up to the front doors of three of our neighbours so he could say “hi.” He just loved being part of the action!

(Little would I know that from then on, every day Theo has an expectation to go up to neighbours’ front doors for fun and visiting. I’ve created a monster!)

The next day, November 1, we moved on to a much more somber event.

The day of Theo’s surgery I woke up to a drizzly, overcast day, definitely reflecting my mood. I didn’t sleep well and was awake at 5:30 am (as seems to be my lot these days). I spent some time in prayer and got up at 7:00 am so I could be ready to go when Theo wakened. I had a limited time frame to get Theo to the veterinarian for his surgery and wanted to make sure we made it in time.

By 7:45 am Theo was still asleep. I woke him up and he started his day, as per usual, with a good five minutes of stretching and yawning. We headed right out for a quick walk (at which time he tried to go visit the neighbours’ houses; see above) as he was not allowed to have any food that morning. I buckled him up in his car seat and off we went to the vet.

When I parked the car, Theo recognized where he was and couldn’t wait to get out. As I unbuckled him he squirmed and squiggled as I tried to explain to him that mummy was sorry but she had to leave him here so he could have an operation. Once he was down on the ground, he headed straight towards the door of the vet clinic.

Inside, he curiously explored around, even though he had been there twice before. I am not sure what he was so excited about! If only he knew that today was the day he was going to be neutered.

I had mixed feelings about him having the operation. I knew that there are health reasons why it is a good thing—he also had to have some dental surgery, which was definitely to his benefit—plus it was in my contract with the breeder that Theo must be neutered by six months of age. I couldn’t help feeling regretful that he would never know doggy love.

So it was with reluctance and a distinct tugging at my heart that I handed over my puppy to the receptionist. She promptly took my squirming pup to the back as Theo twisted around in her arms, eyes imploring me to explain what was going on.

I went out to the car and called my husband. “I feel like crying,” I said. My husband understood how I was feeling and tried to make me feel better. I could feel tears prick at my eyes as I silently drove away.

Around noon I got a call from the vet’s office. “We just wanted to let you know that the surgery went well and that Theo is alert and wagging his tail. You can come and pick him up anytime.”

The call had come much sooner than expected; I had been hoping to finally get a good day’s work done. But I didn’t want to leave Theo in the vet’s office longer than necessary, so I quickly ate my lunch and headed out to run a few errands, including picking up some toddler underpants recommended by the vet office staff to cover up the incision and deter him from licking post-surgery.

When I arrived at the vet’s office, it would be another half hour of paperwork and instruction before Theo was handed back over to me. Based on what they had said earlier, I wasn’t entirely prepared to see how vulnerable he seemed to be, nor to hear his quiet whimpering. “Poor baby,” I thought, kissing him with tears threatening to flow again.

When we got home, I put him in his bed and covered him up with his blanket. He looked so small and vulnerable. 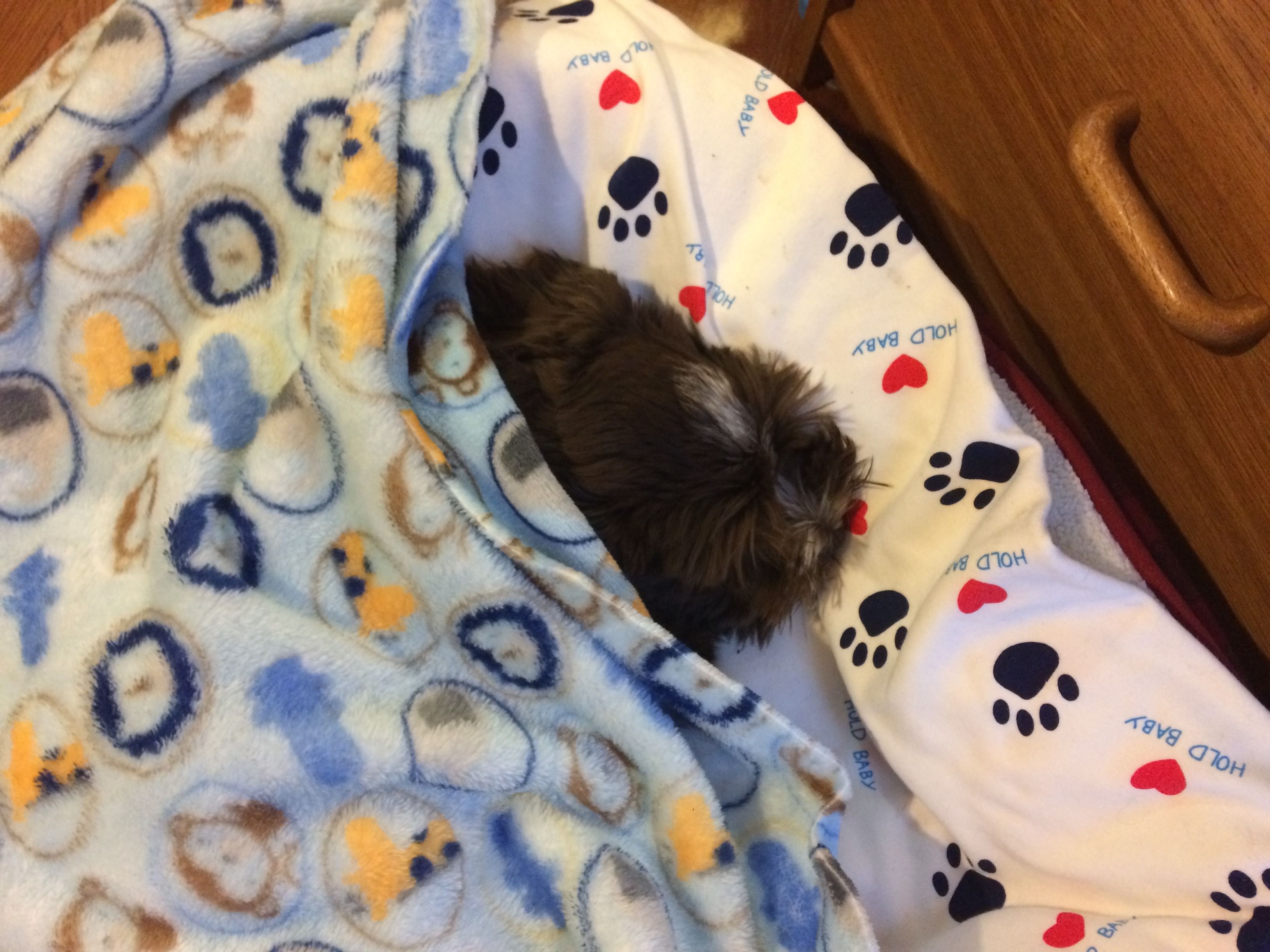 Later I tried his new underwear on him. I bought the smallest size I could find, 2T with a Thomas the Tank Engine theme. (This is the type of underwear I would have bought my kids when they were toilet training LOL.) The underwear went on backwards with Theo’s tail coming up through the fly. 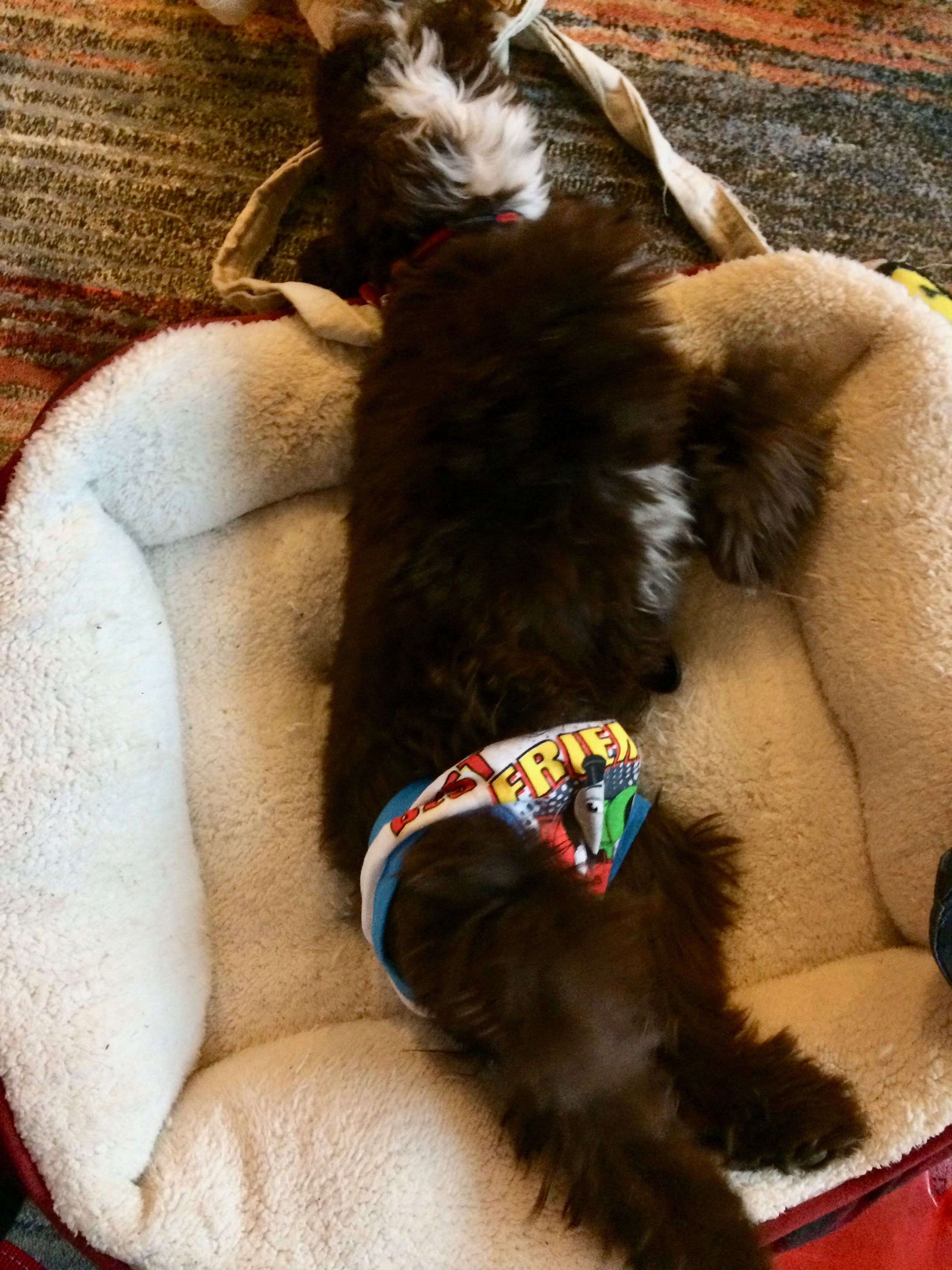 The underwear worked reasonably well but wasn’t perfect. They didn’t stop him from licking the fabric in the general area of his private parts, and because they were not secured on, sometimes they slipped down his legs and exposed his scar while he was in his crate, where I couldn’t keep a close watch on him.

The vet’s office gave instructions to keep him warm and contained in a bed or crate as much as possible. I was to take him out to do potty on an as-needed basis only, with minimal walking. The tricky thing, is that Theo kept on wanting to go outside (and visit the neighbours, see above) but every time we went outside on this cool, wet, November day, he started shivering. It became a repeated cycle of going outside, trying to give him a long enough time to go potty, seeing him shiver, bringing him back in, and sitting with him on my lap to warm him up. The vet’s office later told me that the shivering was normal because of the cold IV fluids they gave him while he was being operated on.

I was pretty exhausted by the time my husband came home.

Explaining that the underpants weren’t quite working, my husband went out to purchase a plastic cone that fit around Theo’s neck to see if that was a better option. The cone provides a physical barrier to prevent licking. Theo really, really didn’t like the cone—I had a sneaking suspicion he wouldn’t—so we had one more option to try.  The following day we bought a post-surgery outfit from the vet’s office. In the end, this has proved to be the best option to protect Theo’s incision. It is fully secure (unlike the underwear) with ties, and Theo doesn’t seem to mind wearing it at all. It is a bit of a pain to have to remove every time he goes outside for potty, but in the end, it was the best choice for Theo. 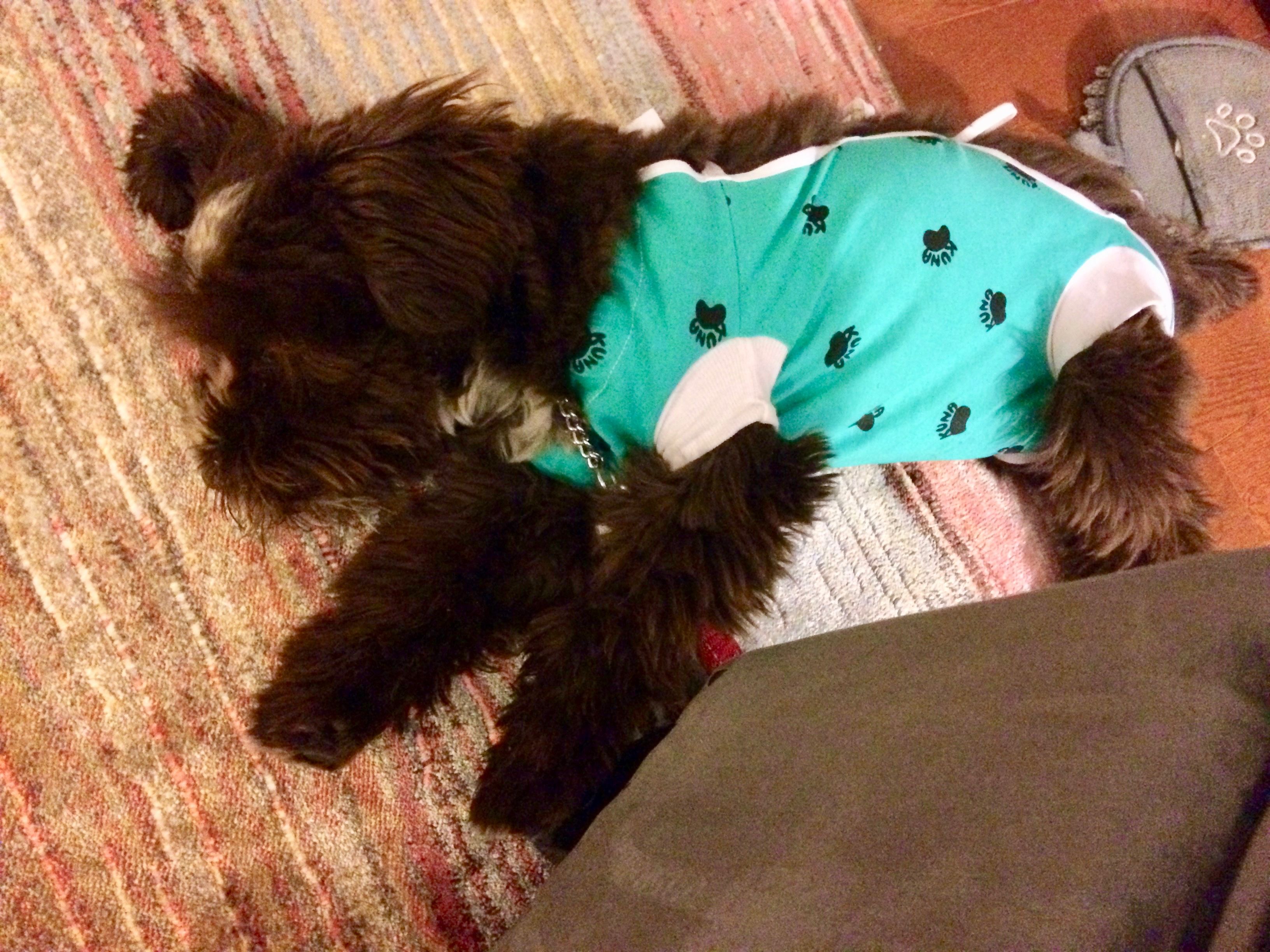 Theo must be carefully watched for the next two weeks. Short walks only, and during that time, he is not to jump up on any furniture or bound up the stairs (oops on that end—twice he has jumped onto the couch and once gotten upstairs (not quite a “bound”) before we could stop him. But so far his incision looks good and we are optimistic for a full recovery.

Are you enjoying my puppy stories? When you sign up here for my newsletter, I will send you my award-winning puppy story “No Greater Gift” published in Christmas with Hot Apple Cider. 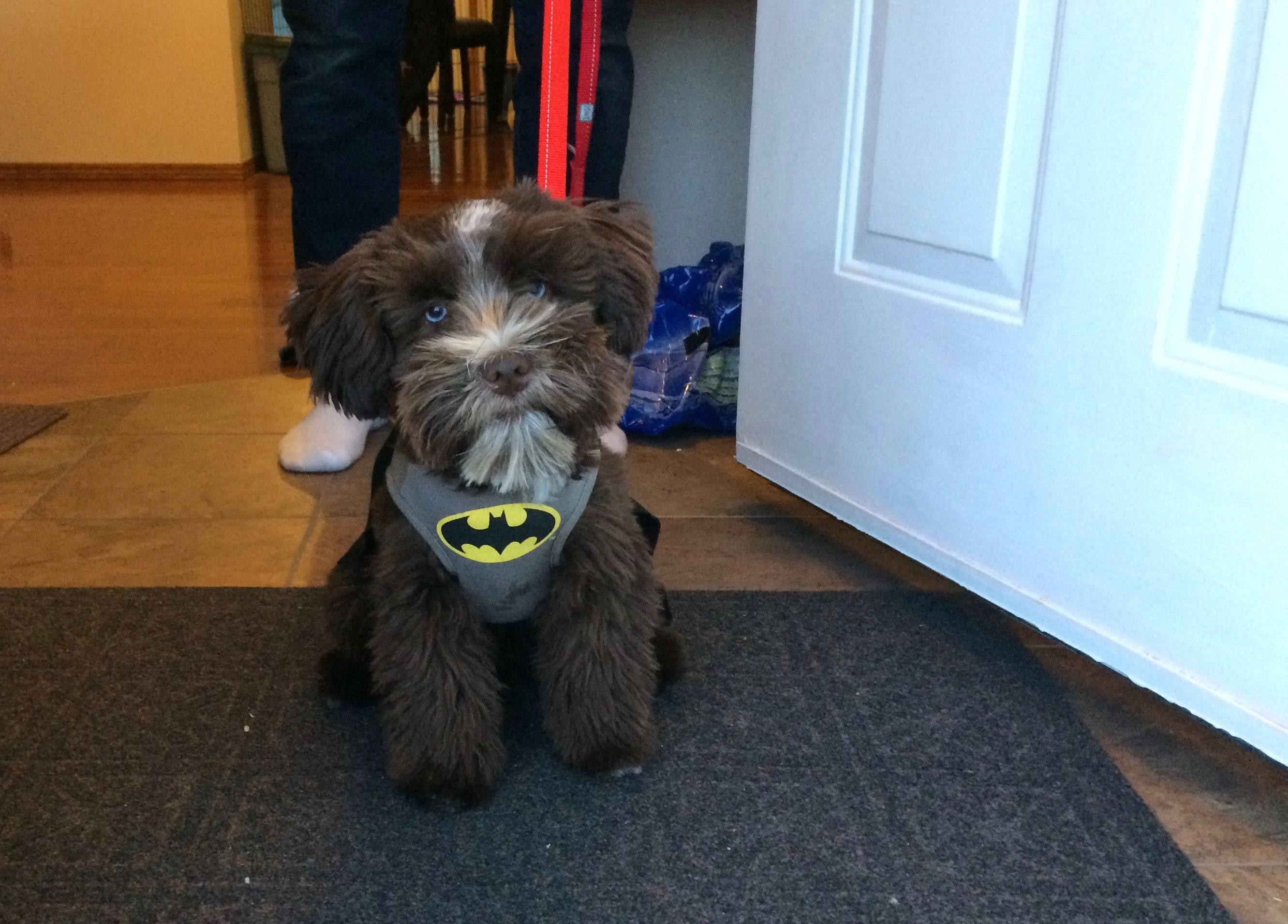