Theo is healing nicely from his surgery. A couple more days and he should be ready to go back to his regular routine. For now, we are still carrying him up and down the stairs, lifting him onto and off the couch, and restricting his activity (including jumping up on people etc.). His post-surgery gown is worn only during naps and overnight (when we can’t monitor whether he is licking his incision) instead of all the time. We are finally getting back to our regular walks (more or less), and we took him out yesterday for the first time in 11 days to visit a big store that carries pet paraphernalia. I have been monitoring him closely so as to not push him during the healing process and letting his recovery guide us. Keeping him low has been easy since I myself have been recovering from a bad cough/cold/flu. After day 10, I could tell he was starting to feel his old self because of his keenness in going on walks and resuming visiting with other dogs while on our walks.

I can tangibly feel that our relationship is growing deeper. Before he liked his own space when he lay down, but now he will lie on my lap (for a while, anyway) and we’ve even cuddled together on the floor pre-nap. I used to worry that I was allergic to him, but I no longer feel that way. I have no hesitation in burying my face in his super-soft and fuzzy hair.

Theo has some funny little quirks and habits. For example, because I have been checking his incision several times a day, I have been putting him on his back and using that opportunity to rub his chest, which he seems to love. He bends his little front paws and kind of goes limp. He looks so different when he is on his back; his ears point upwards instead of flopping like they do when he is on his feet.

Theo still likes to be the leader when it comes to walks. He walks us! I had been working on training him to walk beside me, but for now, while he’s still healing, the priority is on letting him get back into his regular routine. We’ll work on training later.

When Theo is excited, he bounces around like a little lamb. So cute!

One time when I was holding Theo, I burped. I think he felt it rise in my body because he quickly swivelled his head around and took a sniff as I exhaled. I found that so funny! So sometimes I burp (confession here) just so I can see his funny response!

This week we bought Theo a new winter outfit. I love his sweatshirt onesie, but he likes to roll around in the snow when wearing it, and it quickly gets wet. After trying on a few different kinds of apparel (including a bomber with a fur-trimmed hood that matches one of my own winter jackets—too bad, we could have been twins!), we settled on a black-and-red sweater. So far, this seems to be a great choice as it is warmer than the onesie and he seems to like it. We also bought him matching black-and-red booties but we haven’t introduced these to him yet. 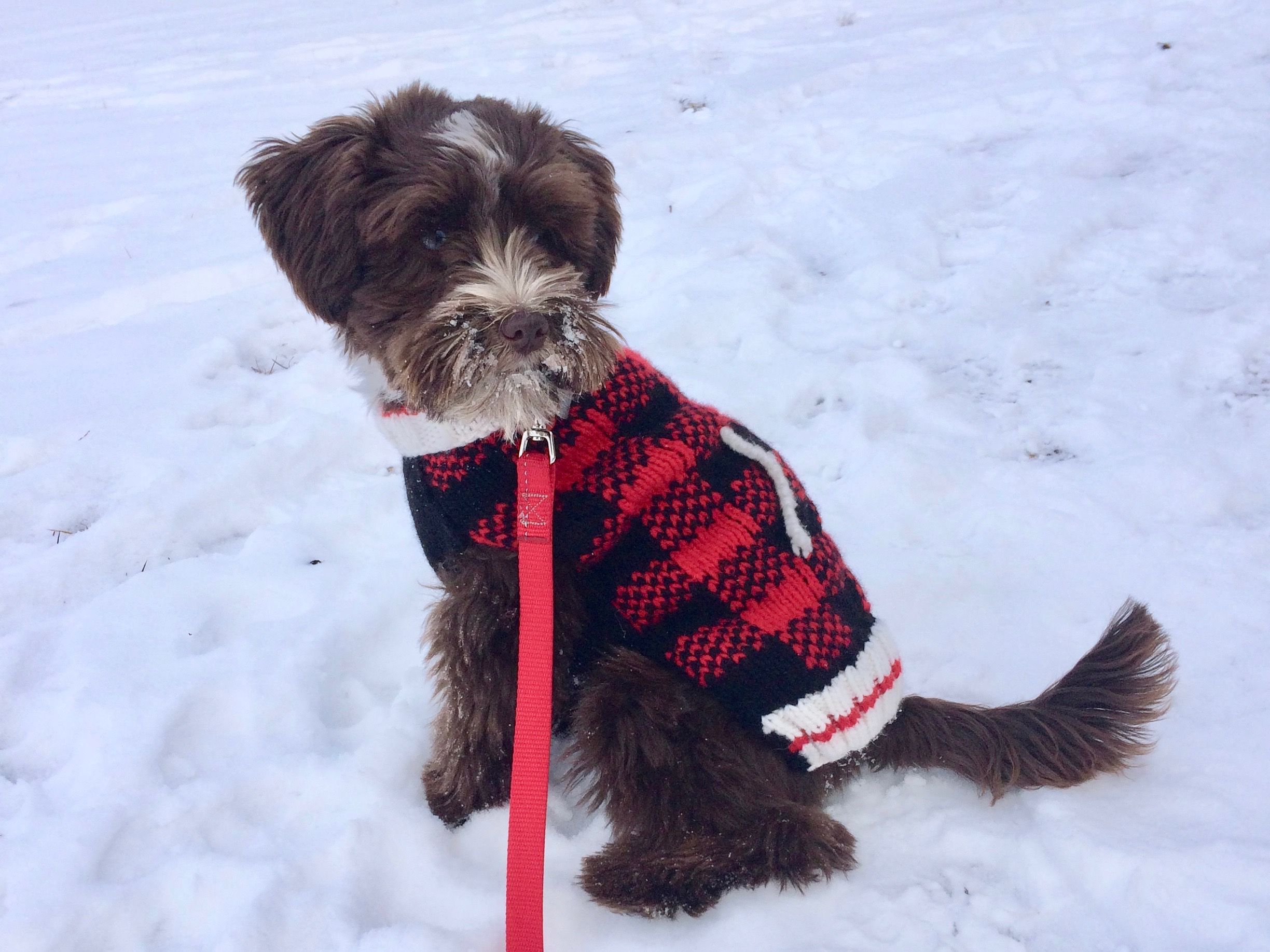 That’s about it for this week. If you would like a PDF of my award-winning puppy story “No Great Gift” published in Christmas with Hot Apple Cider, I will send it free if you sign up for my newsletter!