The Saskatoon Forestry Farm Park & Zoo has had some amazing animals on exhibit, both past and present. But did you know that there is a plethora of wildlife that can be found on the zoo grounds as well? Here is a list of 26 wildlife species my husband and I have spotted on the zoo grounds over the years.

This is by no means a comprehensive list. If you have found others, please comment below this blog in the Comments!

#1 – American Red Squirrel: We have spotted these fun-to-watch cuties on the zoo grounds year-round. Red squirrels are often found where there are lots of pine trees, so it is no surprise that there is a healthy population here where trees are found in abundance! 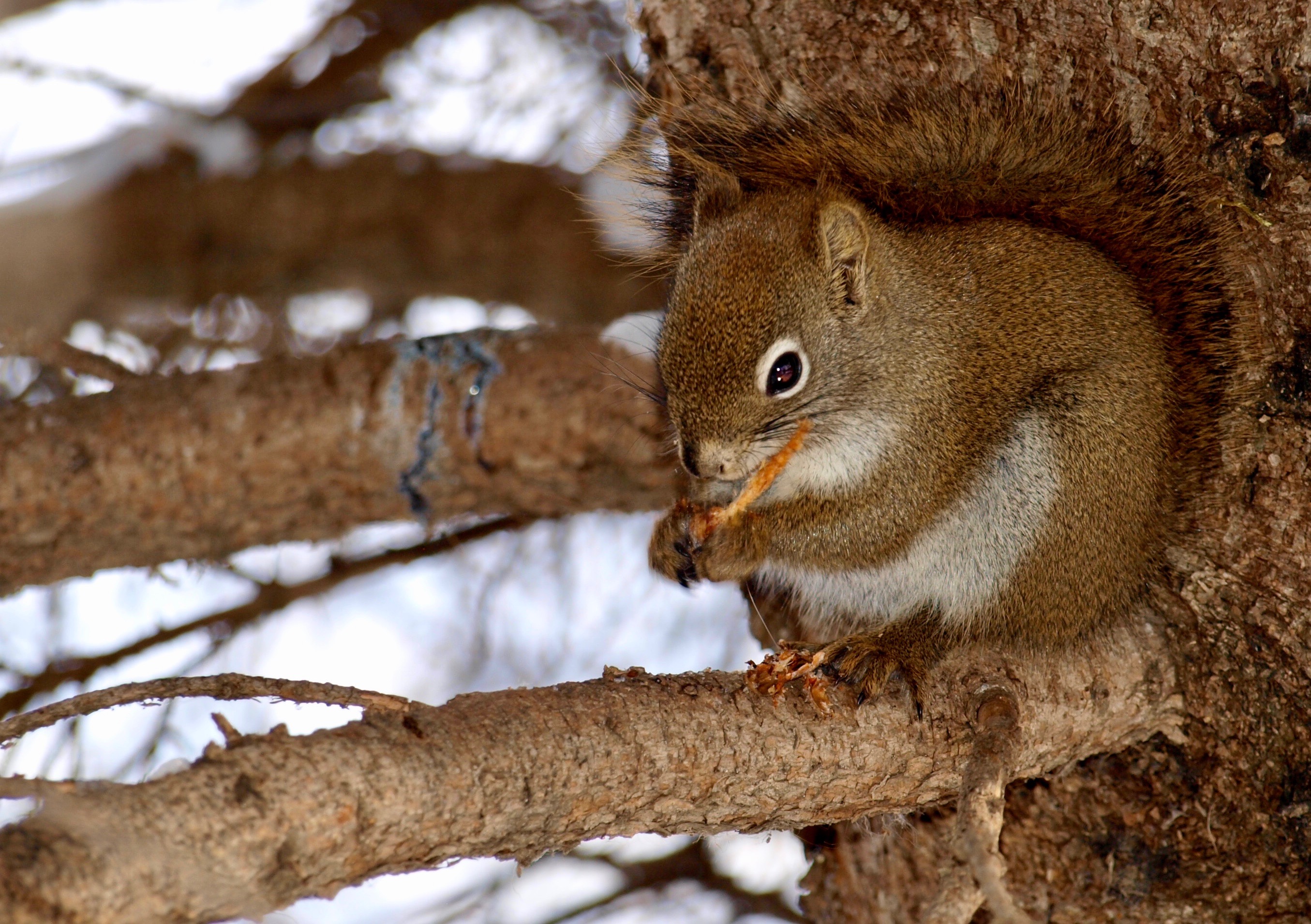 #2 – Red Fox: Although it was too fast for us to get a photo, we did spot a red fox once on the zoo grounds and we’ve also seen paw prints in the snow on other occasions. Perhaps it was visiting the red fox on exhibit!

#3 – Muskrat: This muskrat hangs out in one of the ponds found on the zoo grounds. Muskrats are semi-aquatic rodents that are most active at dawn and dusk. 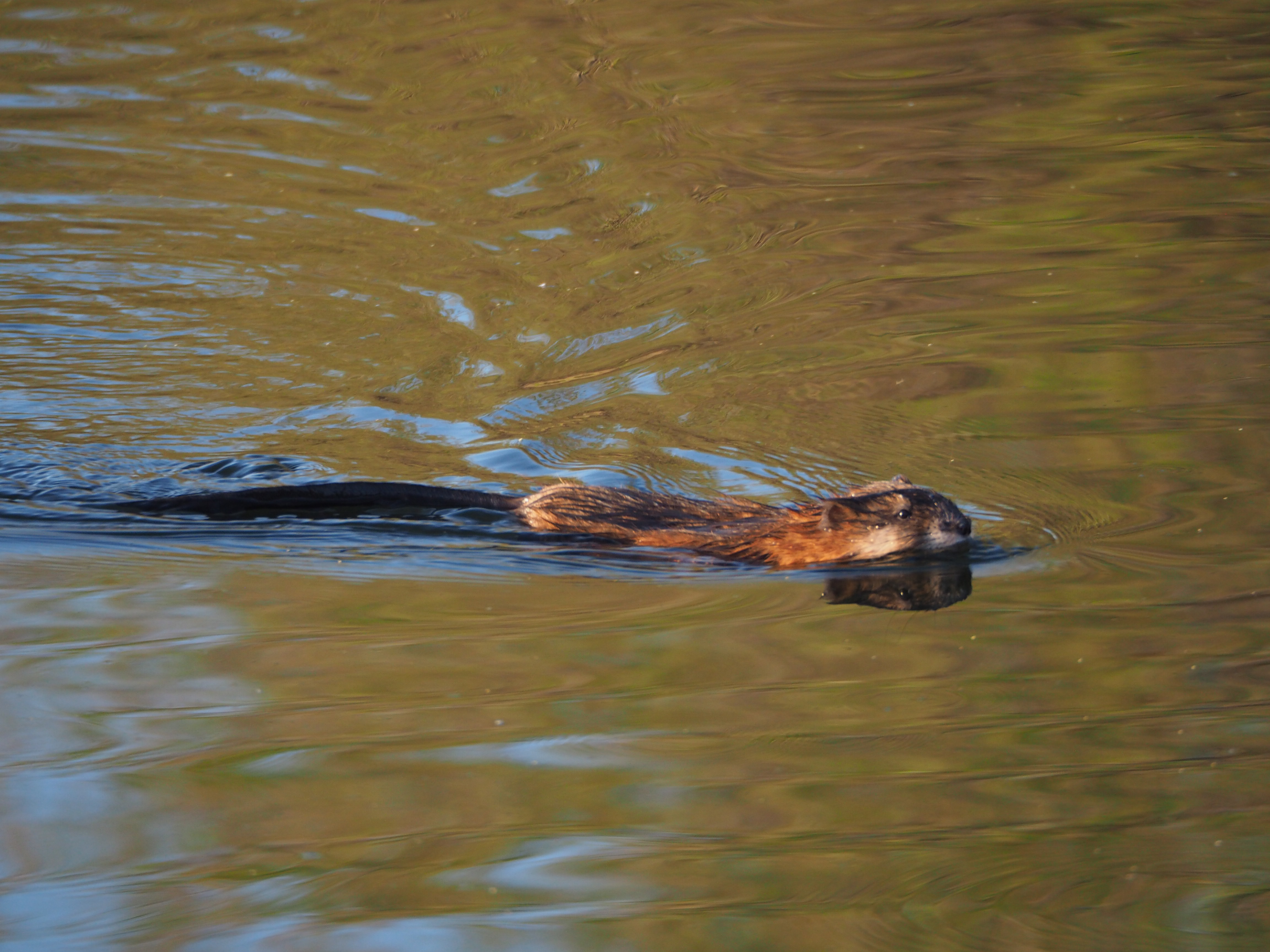 #4 – Richardson’s Ground Squirrel: Otherwise commonly known as “gophers,” we have spotted a number of these making burrows in native prairie-like areas of the zoo, such as can be found in the buffalo compound. Not to be confused with the black-tailed prairie dogs, which are on exhibit in their own restricted area.

Want to keep up with my latest news? Click here to sign up for my newsletter and receive a FREE gift!

#5 – Horned Grebes: We’ve spotted adult and juvenile grebes on the largest pond on the zoo grounds. It can sometimes be hard to tell grebes apart when they are juveniles, but I do believe this is a juvenile horned grebe. 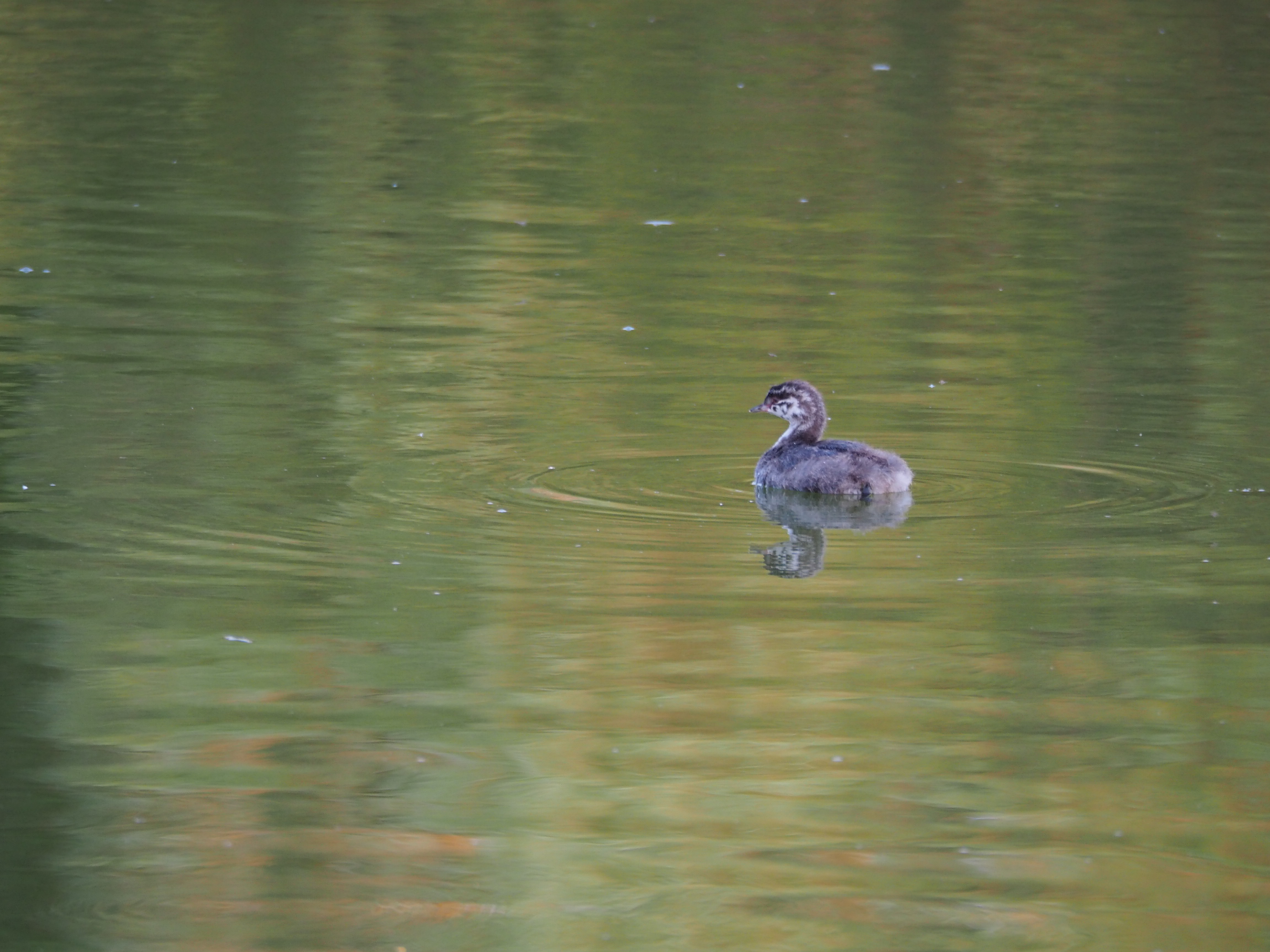 #6 – Canada Geese: These are prolific on the zoo grounds, especially from the spring to fall. Many geese nest on the zoo grounds during mating season (February to April) and raise their babies here too. Be especially careful during the spring—geese are aggressive if you get too close to their expecting or nesting mate and their goslings! 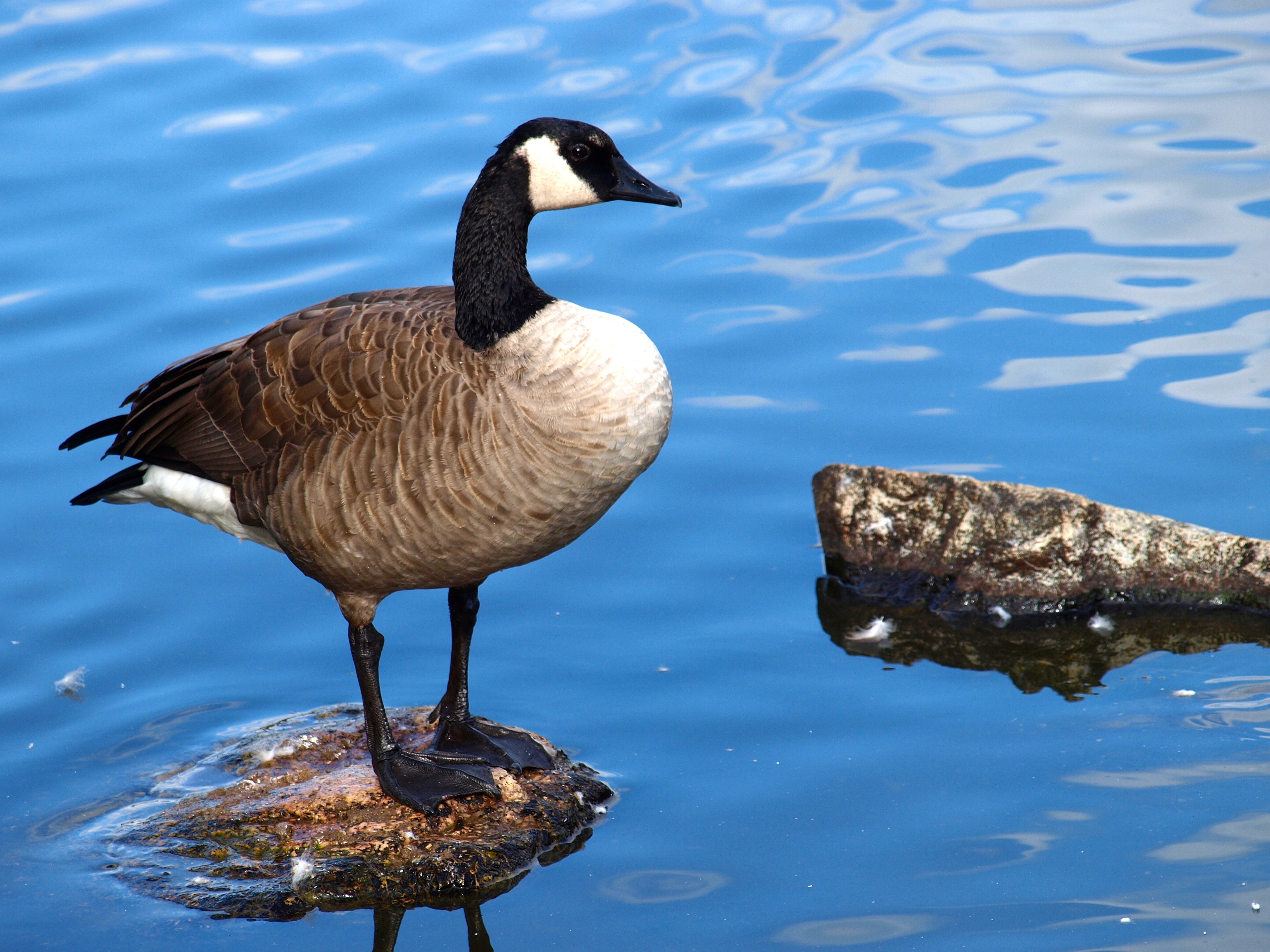 #7 – American Wigeon: During breeding season, the male American wigeon has a dramatic mask of green feathers around its eyes and a light coloured cap that runs from to top of its head to its bill. We have seen pairs as well as juveniles on the zoo grounds ponds. The female wigeon, like many females, is not as colourful as the male. 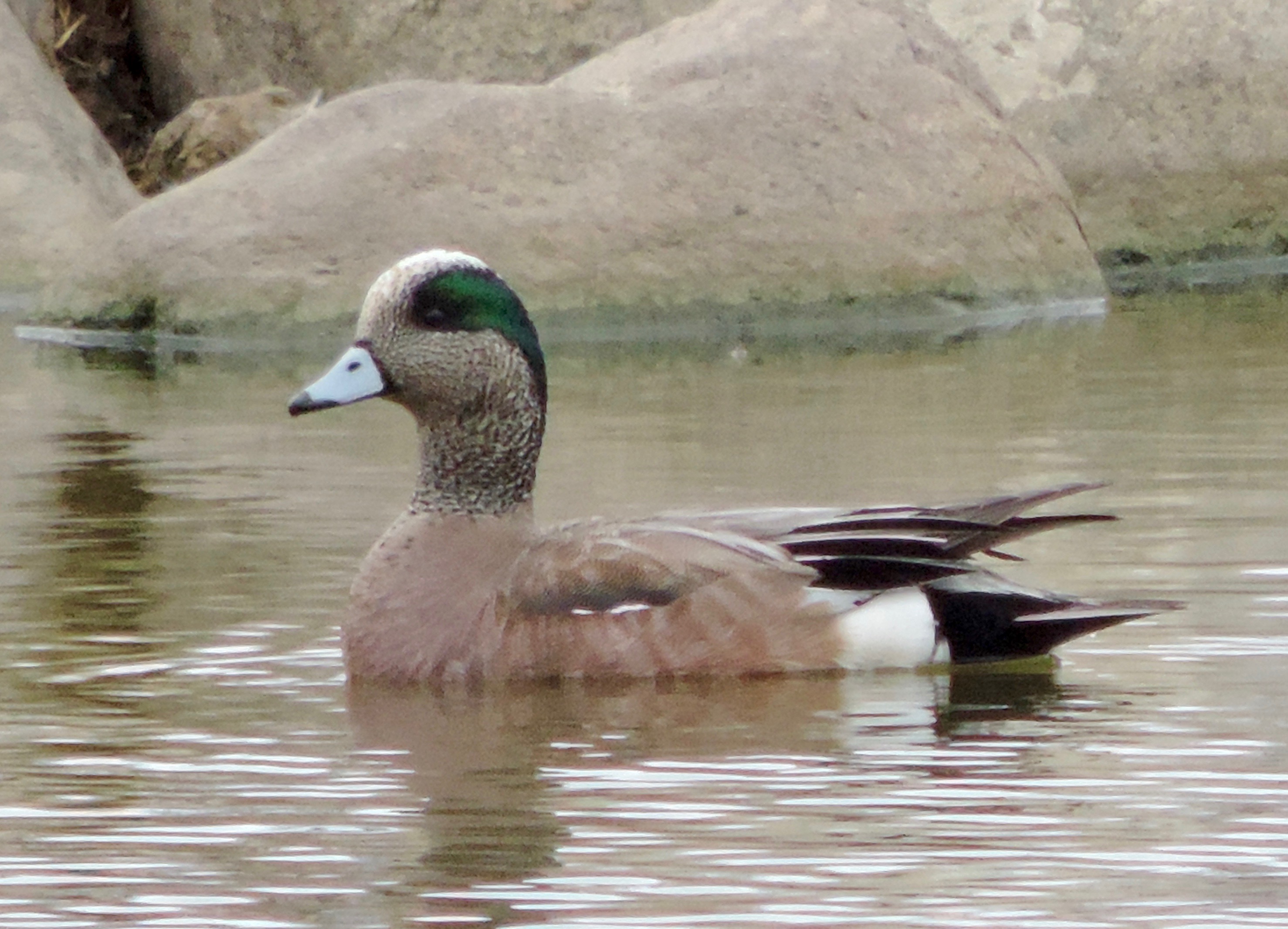 #8 – Blue-Winged Teal: This is a juvenile female. You can clearly see the light blue marking on her wing. Not to be confused with mallards, which have darker blue patches. 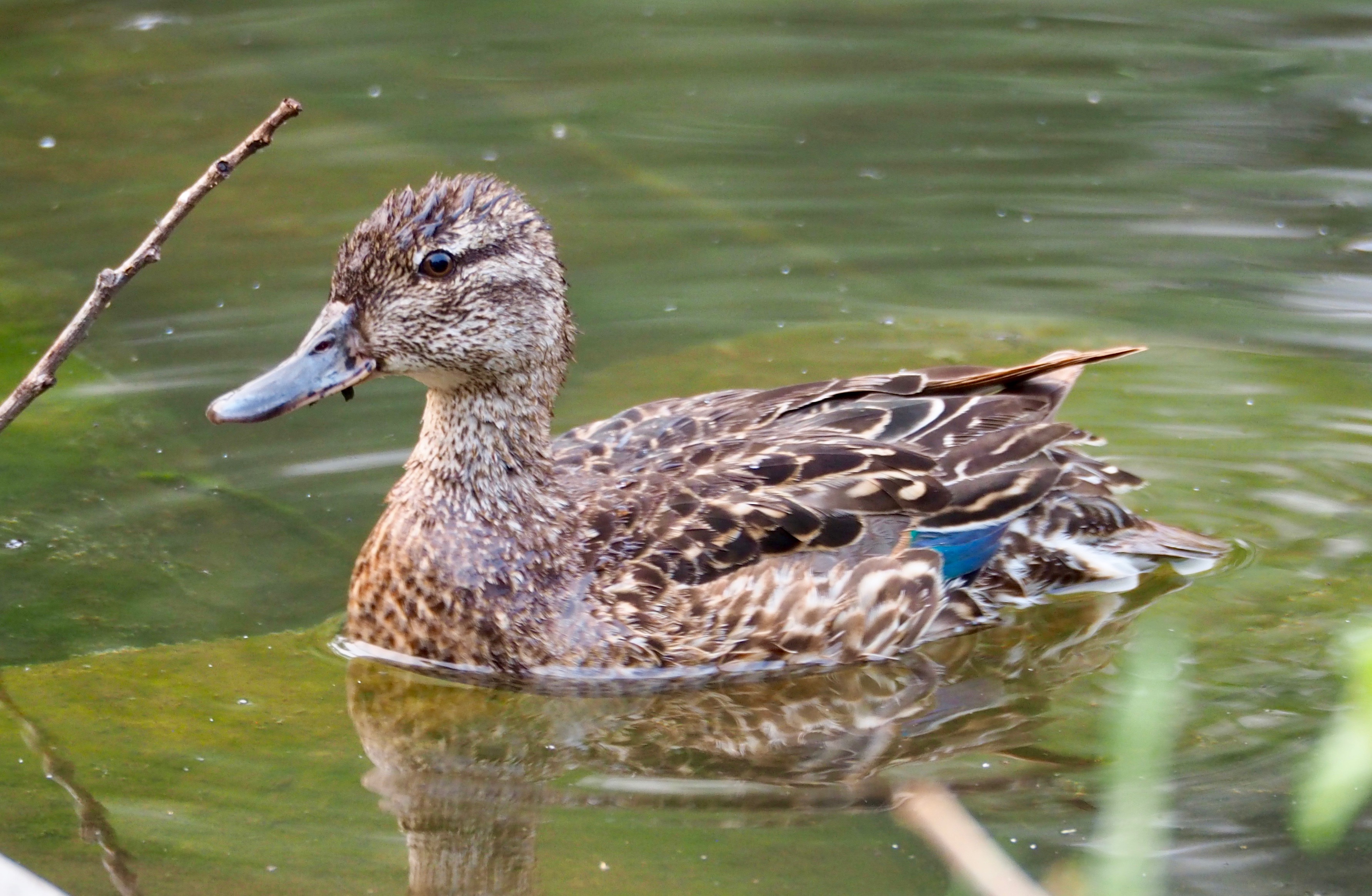 #9 – Green-Winged Teal: This is one of the least common teals in the area so when we spot one, we are thrilled! The green-winged teal is one of the smallest ducks. It has a cinnamon-coloured head, a mask of green feathers, and a metallic green patch on its secondary wing feathers visible most times only in flight. 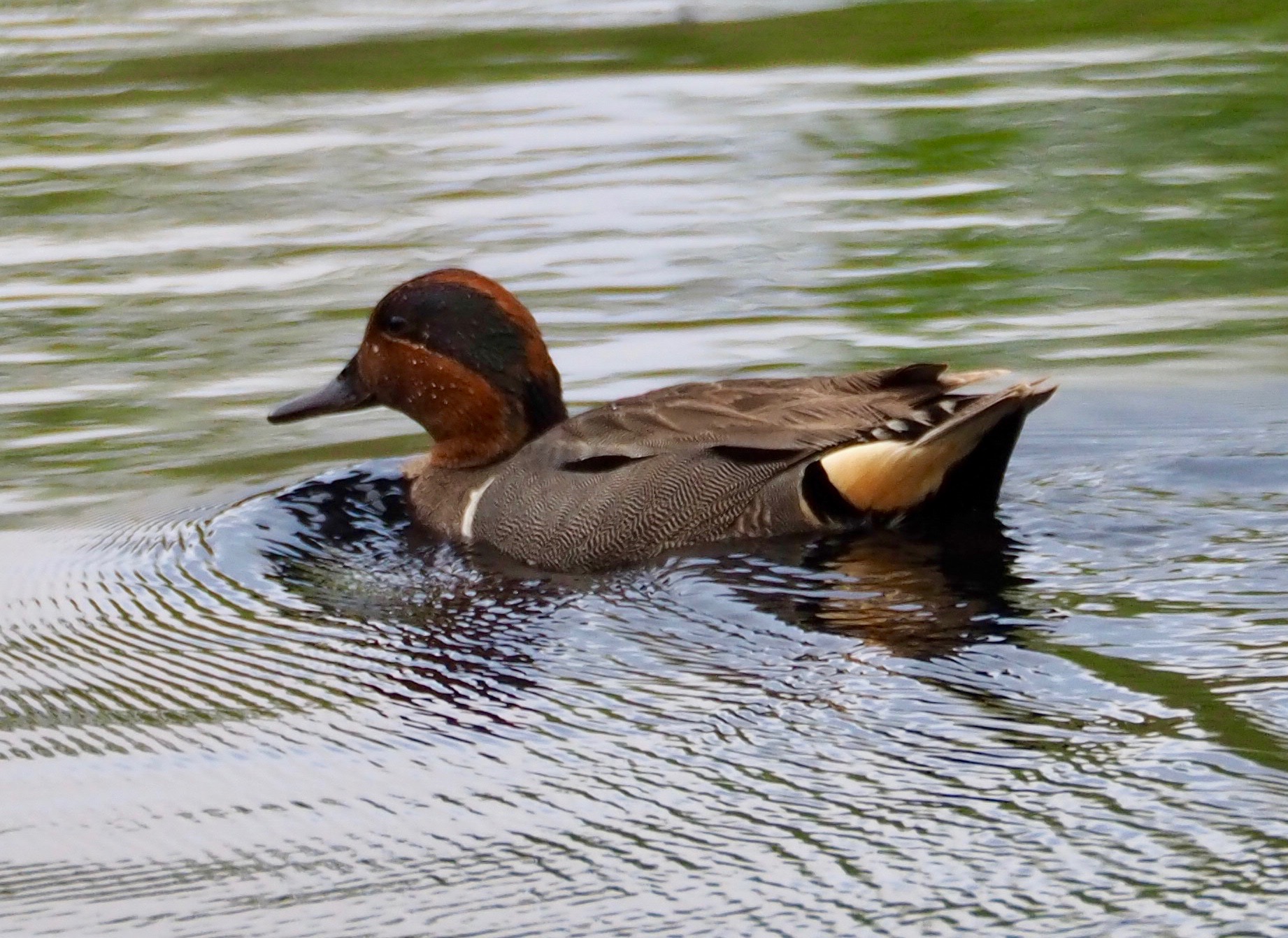 #10 – Willet: The willet is a large shorebird that we have spotted on occasion.

#11– Snipe: The snipe is a wading bird with a long, super sensitive, slender bill that allows it to distinguish objects it comes into contact with while probing in mud, even though it can’t see it.

#12 – Mallard: There are always a few mallard families waddling around and/or swimming in the ponds on the zoo grounds. 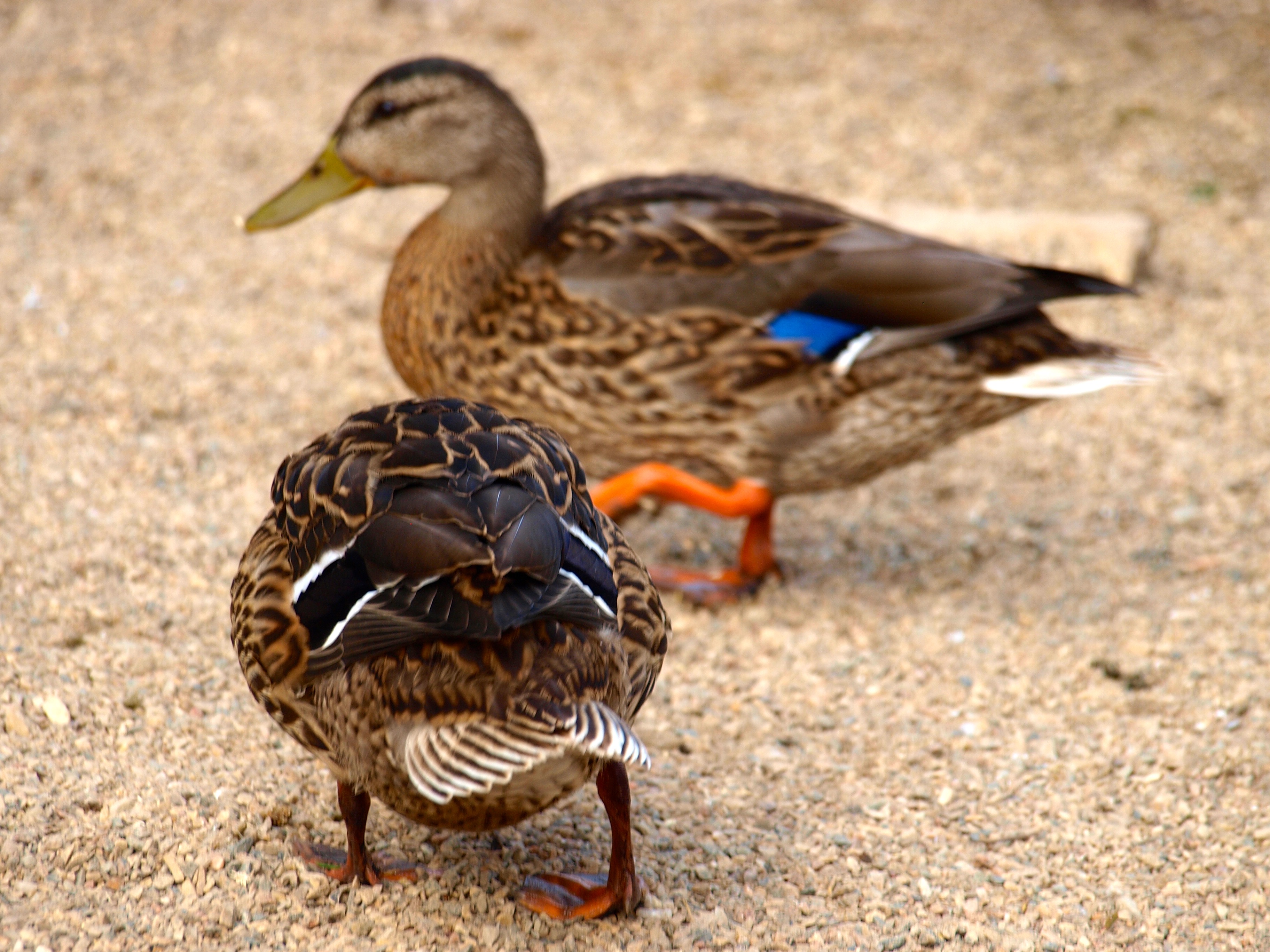 #13 – Northern Shoveler: Without a doubt one of my favourite experiences with waterfowl was watching the courting rituals of these two Northern shovelers in the spring of 2017 at a small pond on the zoo grounds. Large, spoon-shaped bills are characteristic of these ducks. These ducks are monogamous, staying together longer than many other duck species. 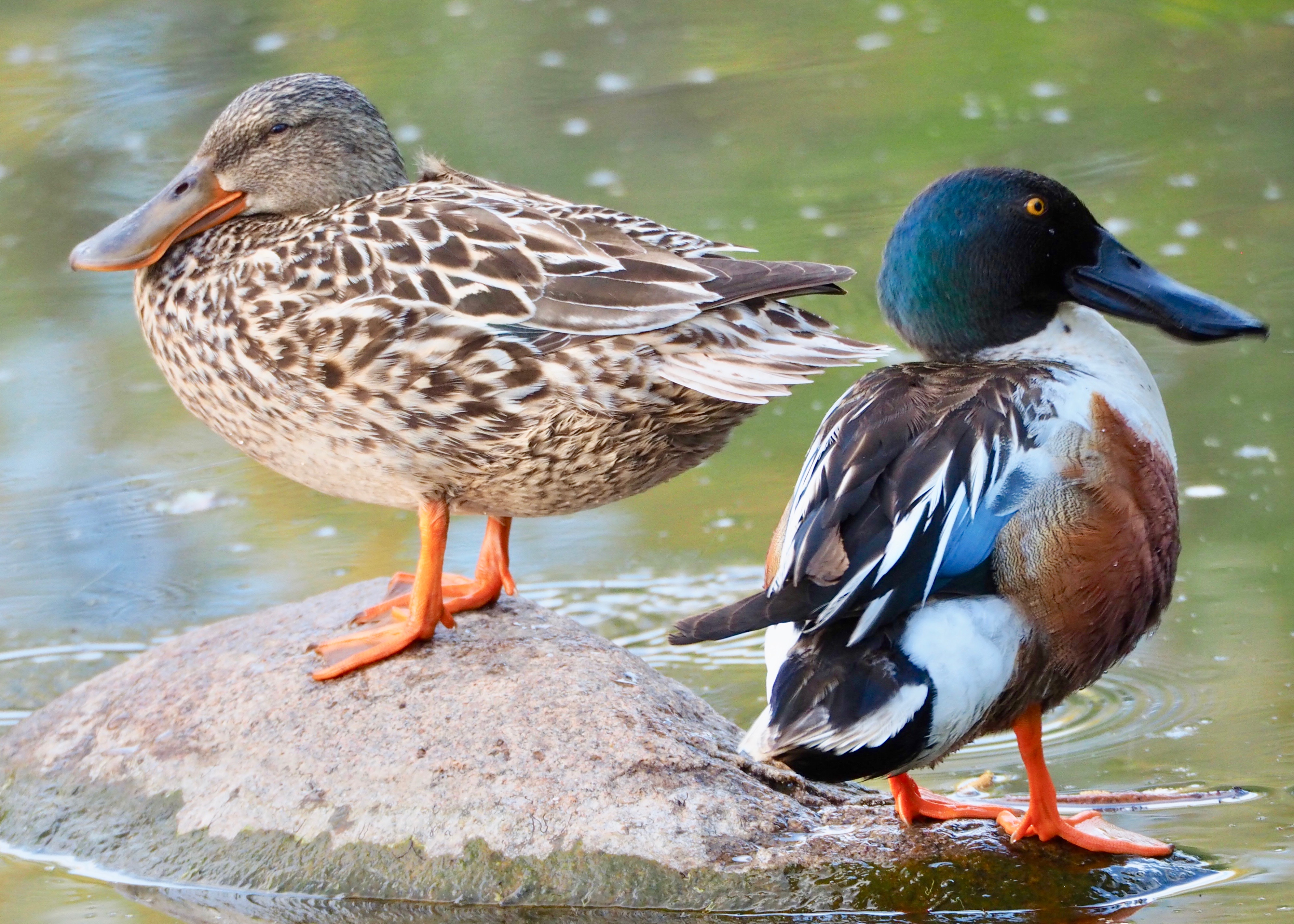 #14 – Spotted Sandpiper: A shore bird that is a rare find on the zoo grounds. We have also found this kind of sandpiper at the storm pond in our suburban neighbourhood. 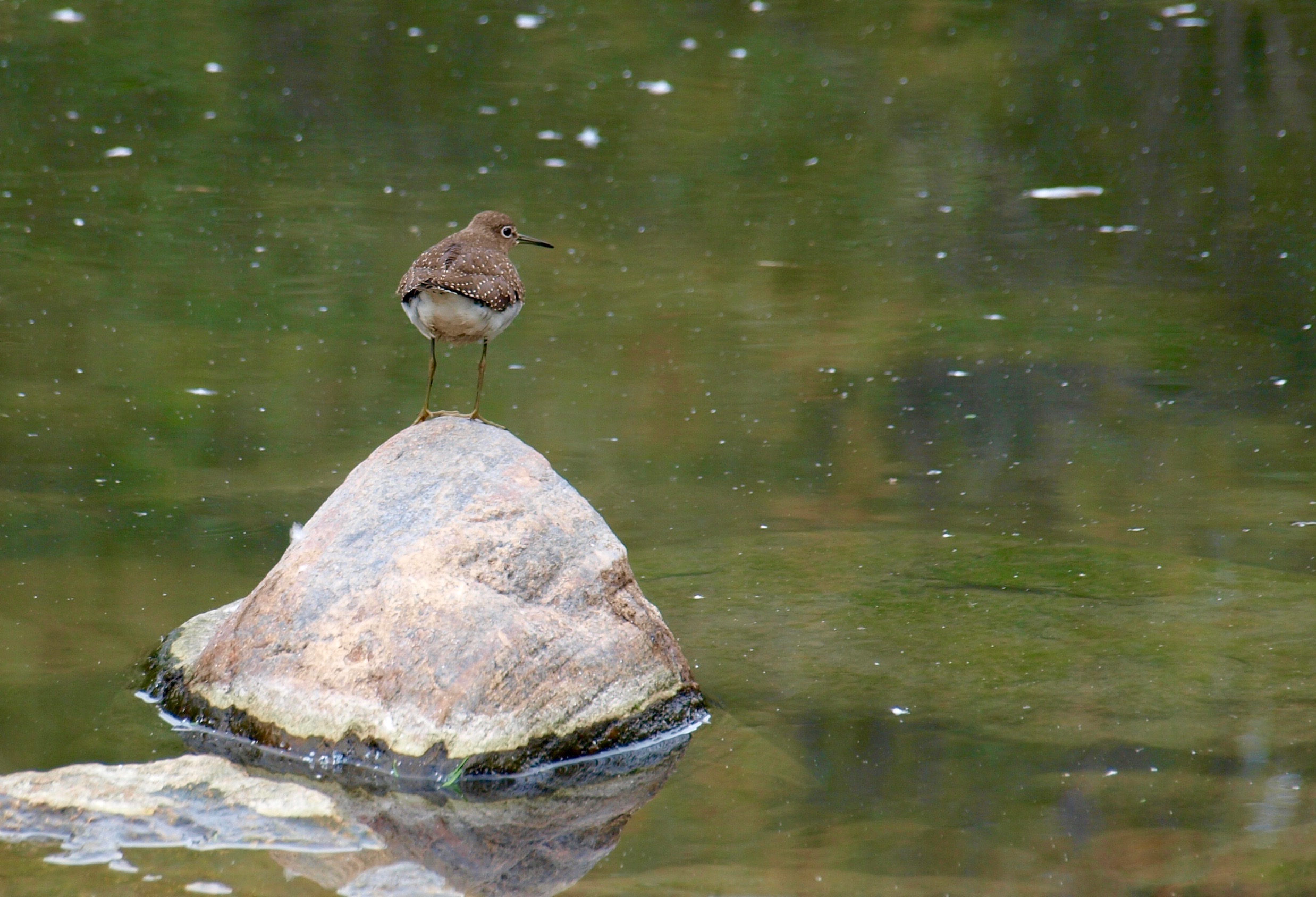 #15 – Northern Pintail: One of my favourite water birds characterized by long “tail” feathers extending beyond their body, a blue-grey bill, and grey legs and feet. We spotted this rather large duck in 2017.  This male is more striking than the drab brown feathers of the female. 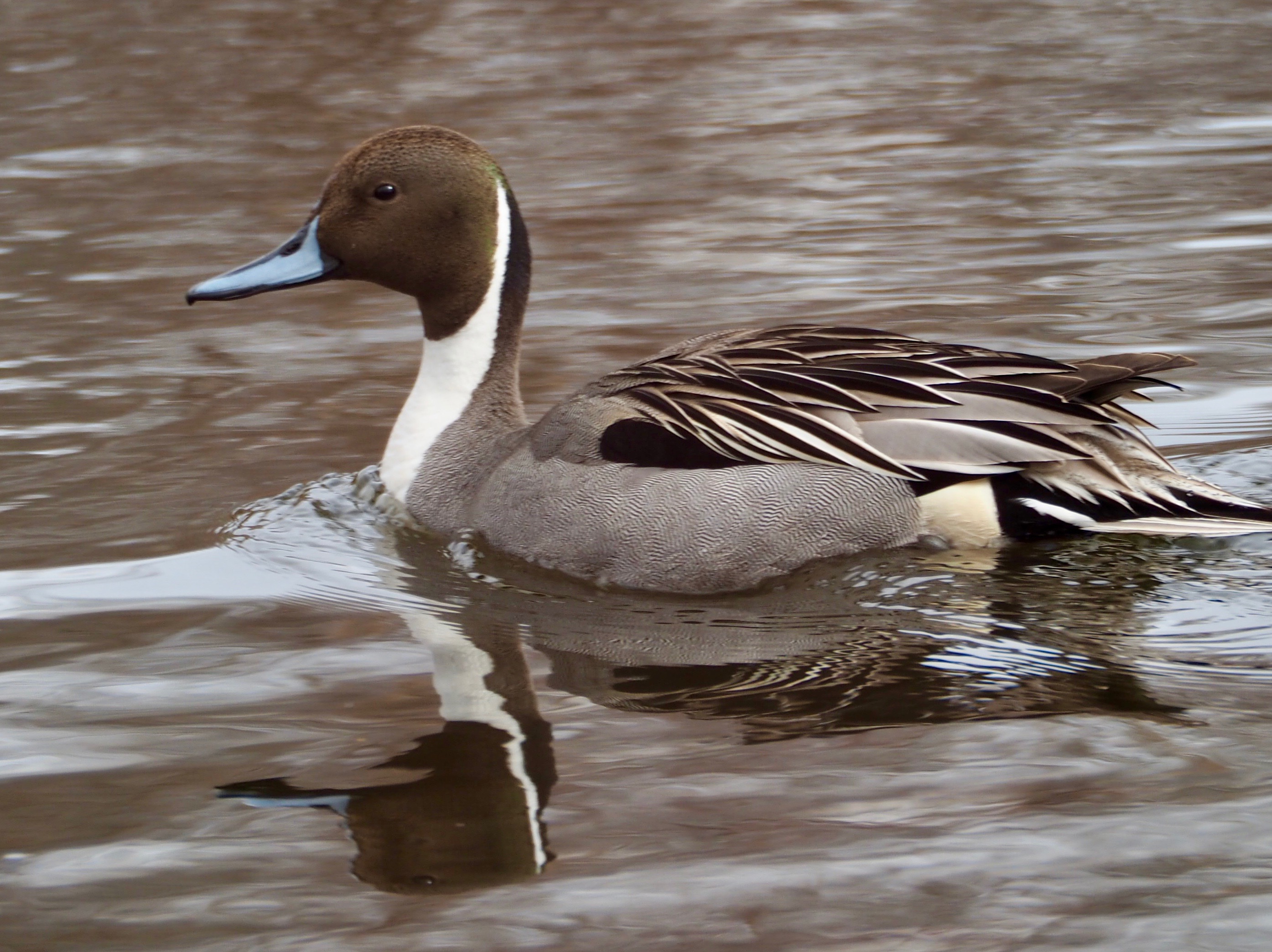 #16 – American Robin: The second most prolific bird in North America. Not surprising to find it here where it has everything it needs!

#17 – Yellow Warbler:  It’s a treat to see these small, bright yellow (when breeding) songbirds flitting around.

#18 – Bohemian Waxwing: These waxwings breed in evergreen forests then spend the rest of the year in open areas with plenty of fruit. 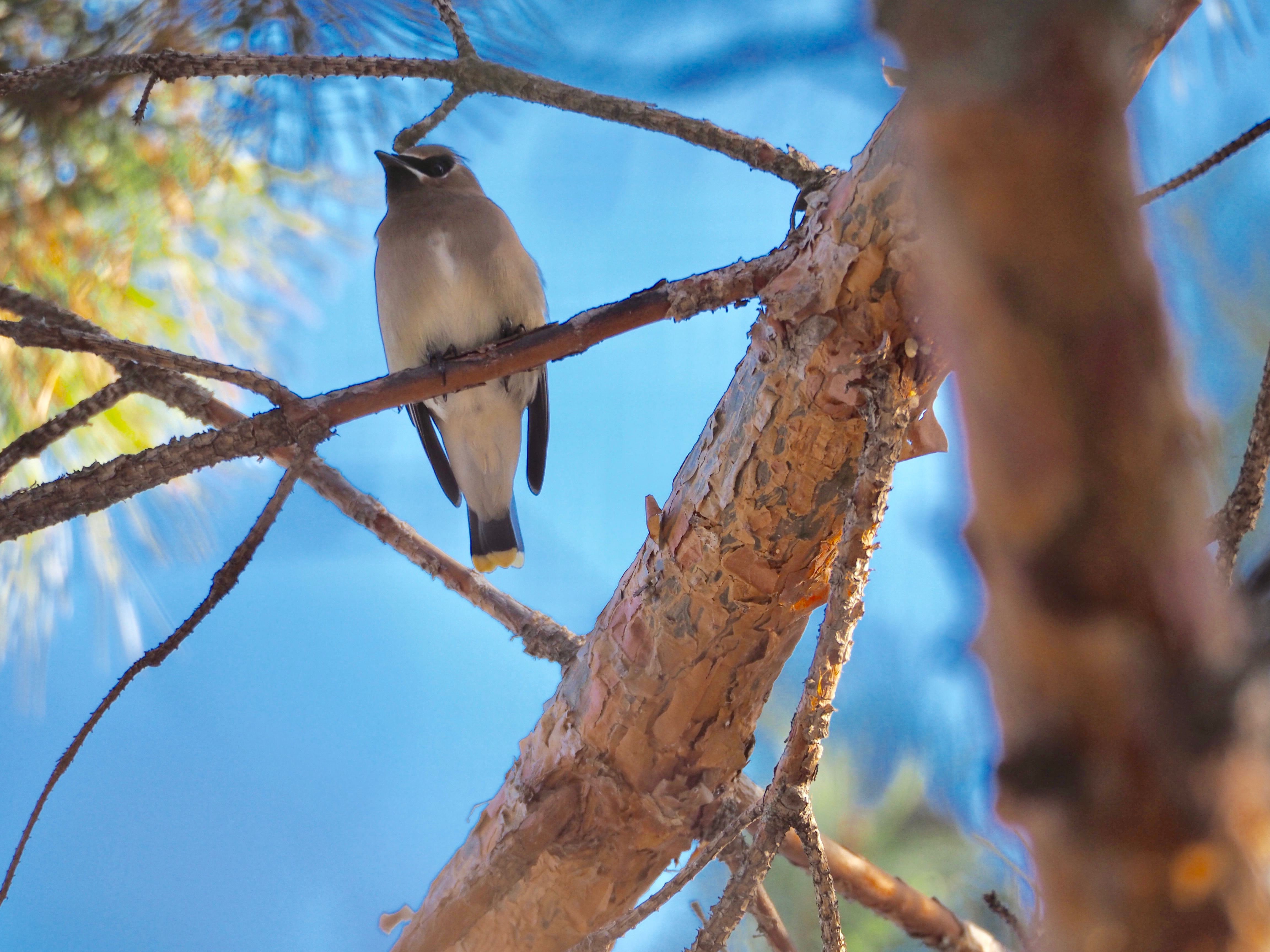 #19 – Black-Capped Chickadee:  This Canadian favourite makes up to 15 different calls in communicating with its offspring and flock mates. A chickadee also has a good memory and is able to remember where it hid food for at least 28 days. 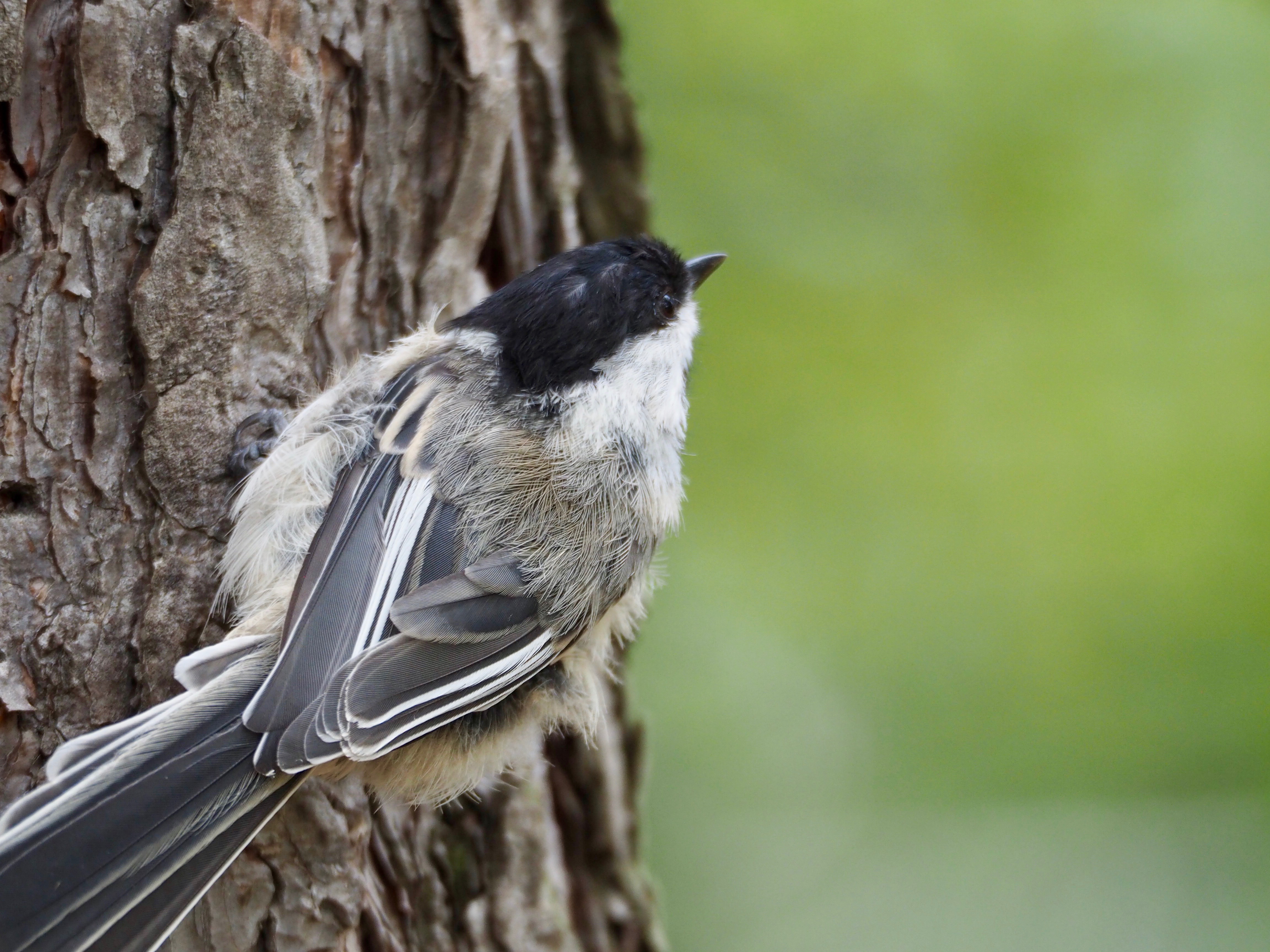 #20 – Common Redpoll:  These small songbirds have a streaky brown and white appearance with a small red cap on its forehead. Males also have a reddish breast.

#21 – House Sparrow: I took this photo of a female house sparrow just last week. She was doing some acrobatics to get at the buds on the branches behind the fence! 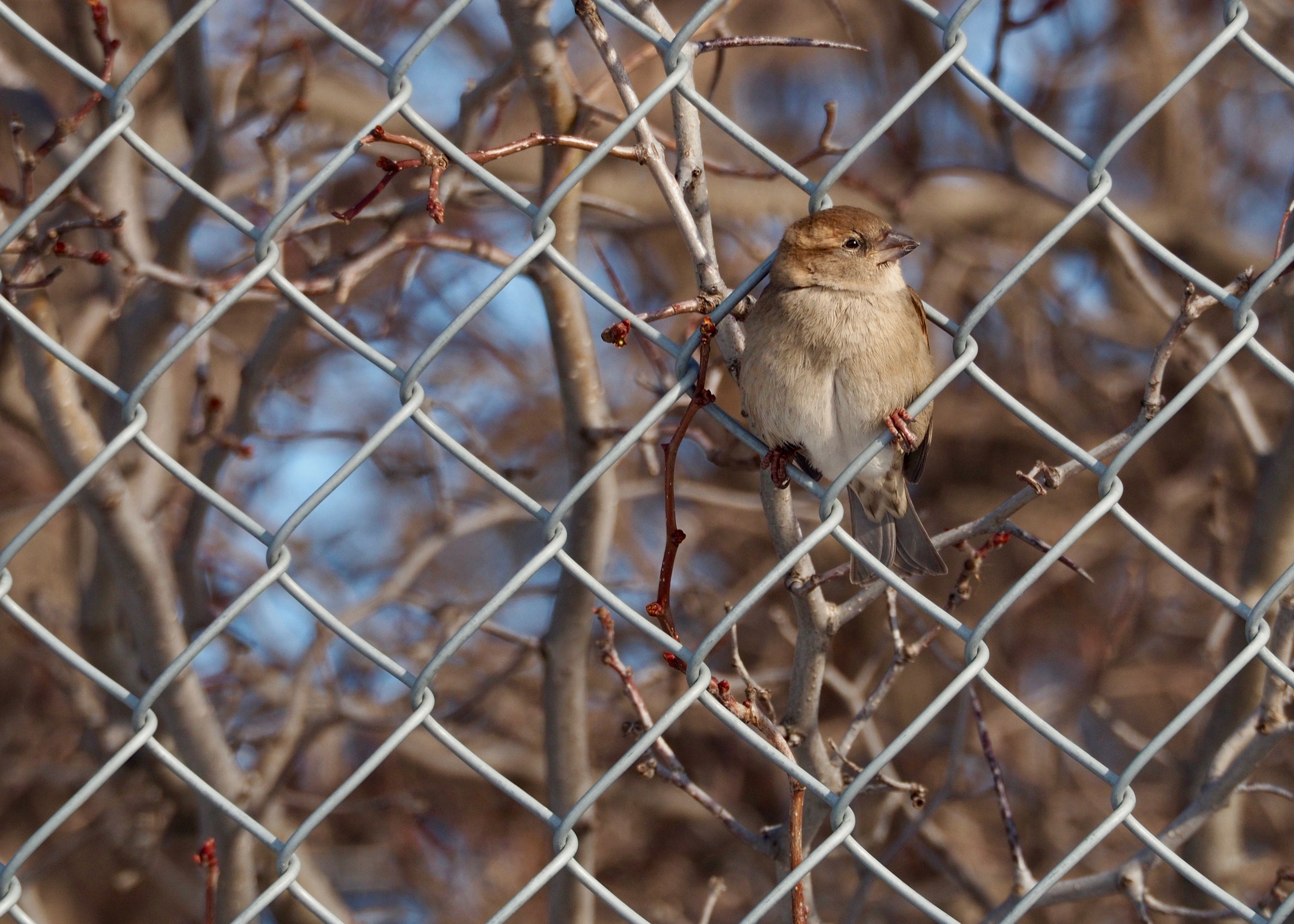 #22 – Magpie: Magpies are prolific in our area, so it is not surprising that they appear on the zoo grounds as well. This is a baby magpie that, according to zoo staff, kept on trying to get out of its nest and they had to keep putting it back! From 2017. 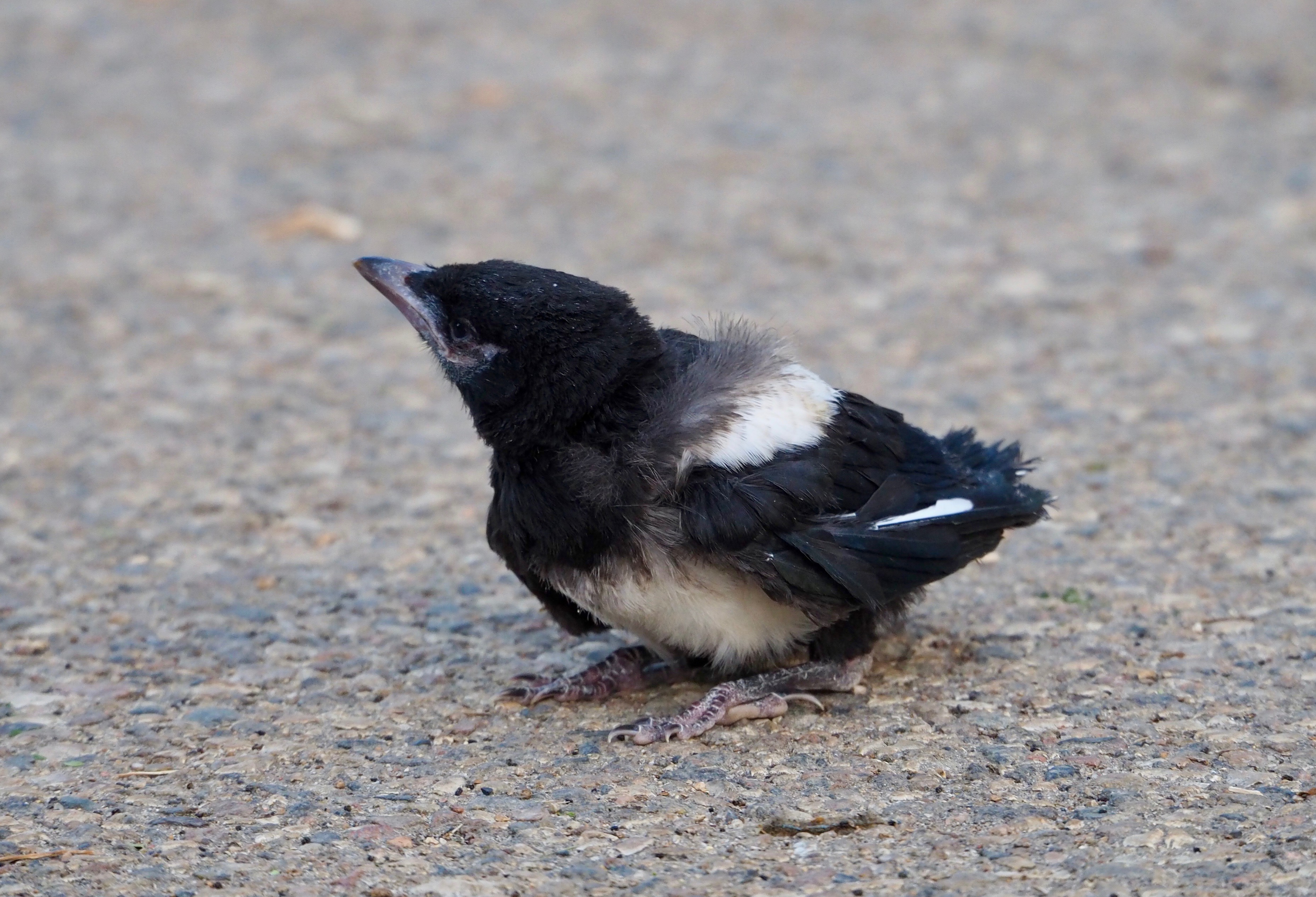 #23 – Pine Grosbeak: The greyish bodies of these finches are tinged with pinky-red on the males and yellow on the females. Because the plants they eat are hard to digest, they feed their nestlings a paste of insects and vegetable matter that they have regurgitated from pouches in the lower part of their jaw on either side of their tongues.

#24 – Downy Woodpecker: We were delighted in 2017 to see about a half dozen juvenile downy woodpeckers in the trees bordering one of the ponds on the zoo grounds. We spent quite a bit of time watching and photographing them. 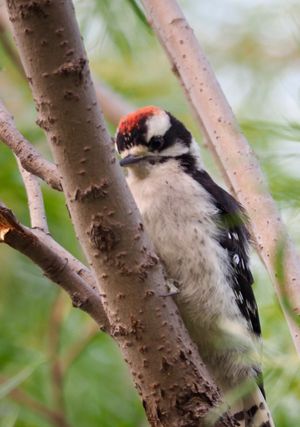 #25 – Blue Jay: Although we haven’t seen a ton of blue jays on the zoo grounds, this one stood out. We watched for several minutes as it kept on pecking at this hive violently, over and over. We assume that it was after larvae in the hive. 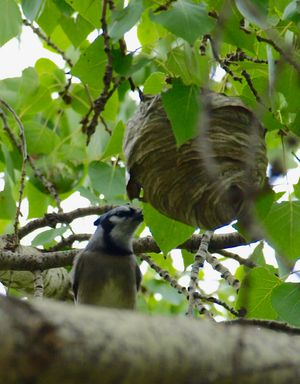 #26 – White Admiral Butterfly: I don’t often try to photograph butterflies because they are constantly in motion. On this particular occasion, this white admiral butterfly paused on a bush near one of zoo grounds ponds just long enough for me to snap a photo. While there are undoubtedly other butterflies on the zoo grounds, this is the only one I have been able to positively identify. 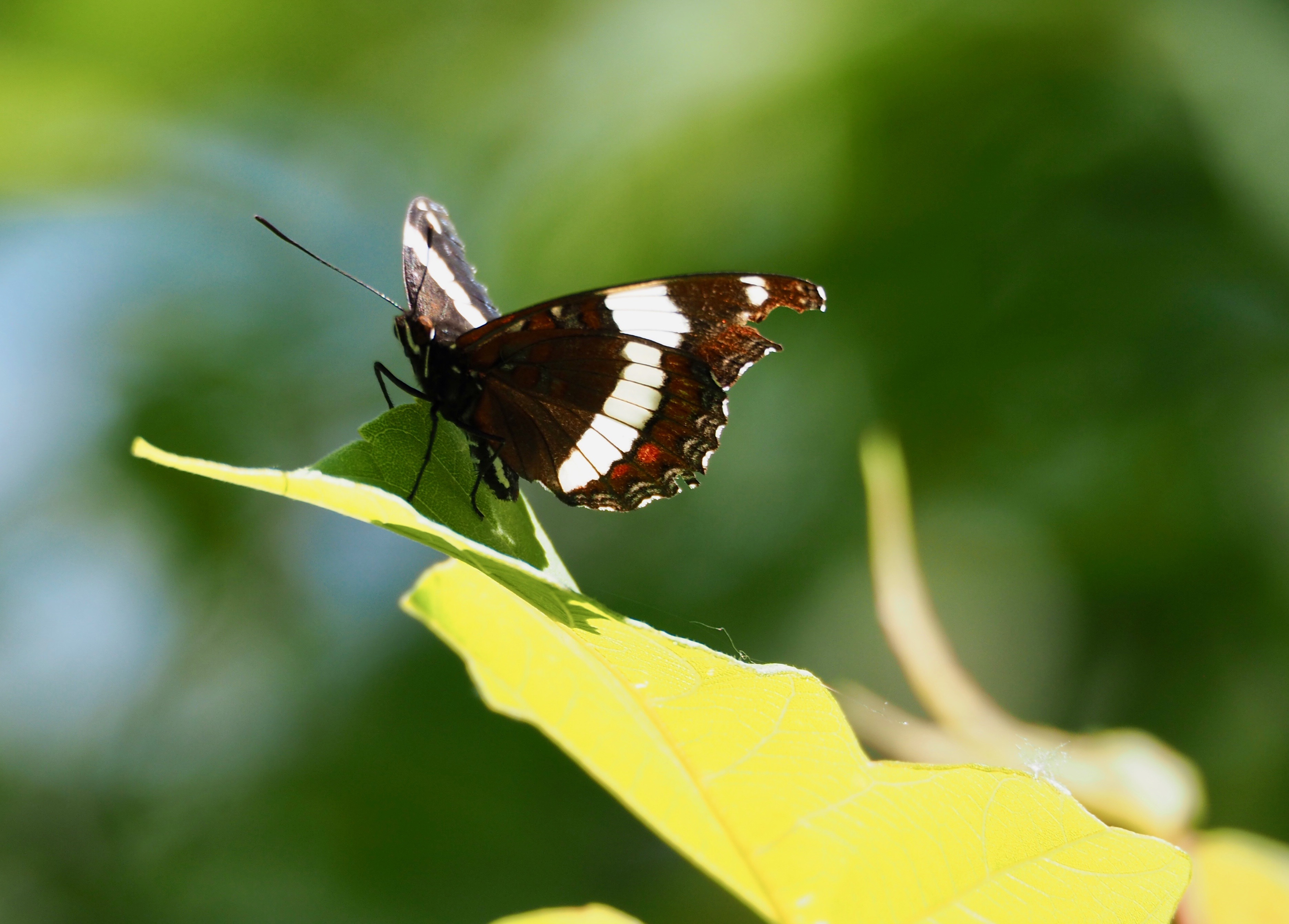 Your turn—what wildlife have YOU spotted on the Saskatoon Forestry Farm Park & Zoo grounds? Please let me know below in the Comments! I would love to hear from you.

Want to read more? Click here to read my blog featuring 13 animals that used to reside at the Saskatoon Forestry Farm Park & Zoo.